The Federal Reserve cares about what people think inflation will be in the future, and they are typically monitoring future expected inflation by various measures. A recent report by the Federal Reserve Bank of New York shows that inflation expectations over the next year based on the Survey of Consumer Expectations are on the rise, reaching 2.83%. This one-year measure is higher than they have been in about a year (see 2016 version of same report when they suddenly fell to 2.5% from 2.8%). While expectations based on this survey are up, the all time low measure was 2.5% in 2016, and the current value is down from levels when the survey first began in 2013. 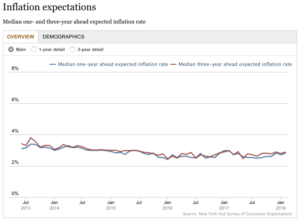 One other measure of expected inflation compares the difference between returns on 10-year Treasury bonds and 10-year inflation-protected Treasuries (or TIPS). This measure–called the 10-year breakeven rate–has recently risen to 2.12%, the highest level since 2014. It suggests investors expect the U.S. inflation rate to be running at annualized 2.12% on average within a decade, slightly above the Fed’s 2% target.

The Federal Reserve itself offers a consensus forecast based on measures put forth by the individual central banks. Looking at the graph above, you might notice that today’s inflation measures are below 2%, but they expect them to rise to about 2% in the next couple of years.

Recent measures of actual inflation for headline inflation touched above 2% for two months in 2017, the first time this occurred since April 2012. We have tended to now undershoot the Fed’s target for medium term inflation for the better part of six years. There are many measures of inflation, and survey-based measures do give some insight on how these expectations are formed and used.

Fed research from St. Louis, suggests these inflation expectations are not all that accurate. Furthermore, the San Francisco Fed finds that market-based measures do not appear to offer much information about future inflation as one might expect. However, it should be noted that people probably make plans on their investments, and wage setting based on what they expect inflation to be. With that being said, it appears as though the Fed’s inflation expectations play a role in their future policy, as noted by former Fed Chair Ben Bernanke (if you are going to read one thing here, make it the Bernanke article).