The Federal Reserve cares about what people think inflation will be in the future, and they are typically monitoring future expected inflation by various measures. A recent report by the Federal Reserve Bank of New York shows that inflation expectations are still muted with those surveyed expecting inflation to only be 2.5% over the next year. This is an “all-time low” for the survey–started in 2013–down from only slightly higher levels in the previous year. 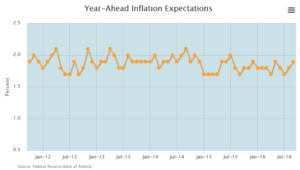 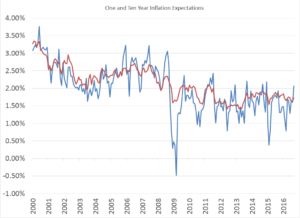 One other measure of expected inflation compares the difference between returns on 10-year Treasury bonds and 10-year inflation-protected Treasuries (or TIPS). The 10-year breakeven rate has recently been rising, most recently to 1.63 percentage points. However, the level is still well below the Fed’s 2% target.

For years now, these expectations have been undershooting the Fed’s target for medium term inflation of 2%. In order for the Fed to get back to where they want in terms of output, employment, and inflation, they may have to overshoot their target rate of inflation to get back on track with respect to the price level. The Cleveland Fed also reported last year that measures of inflation are at around 1%, rather far from the Fed’s target, and CPI measures are down below 1%. There are many measures of inflation, and survey-based measures do give some insight on how these expectations are formed and used.

Fed research from St. Louis, suggests these inflation expectations are not all that accurate. A big question might be that we are asking too much (perhaps we expect too much) of the Fed and other central banks. Furthermore, the San Francisco Fed finds that market-based measures do not appear to offer much information about future inflation as one might expect. However, it should be noted that people probably make plans on their investments, and wage setting based on what they expect inflation to be. With that being said, it appears as though the Fed’s inflation expectations play a role in their future policy, as noted by former Fed Chair Ben Bernanke (if you are going to read one thing here, make it the Bernanke article). Bernanke however does believe that there is still room for cutting rates–even today. Others suggest that the Fed and other central banks are out of ammunition or that due to globalization of capital markets there is little central banks can do to influence their own economies.